Catalina Jazz Club is that popular hot spot in Hollywood that is known for its live music, warm ambiance, tasty entrees, great sound system, and its long list of talented artists who have performed there. Centrally located on Sunset near Highland, Catalina Jazz Club is known as the venue where anybody who is anybody has performed.

Manny, the manager and his team of servers work very hard to get everyone in, seated, and served, in a timely manner. The owner of the club, Catalina, for whom the club is named, frequently comes onto the floor to personally stop by and say hello to many of the club’s guests. The layout of the club allows for a decent view of the stage from most angles and contributes to the warm, intimate atmosphere that the club provides. 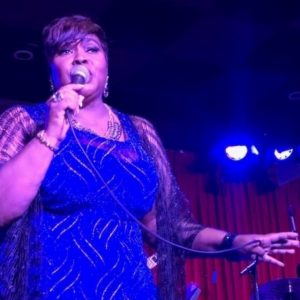 The Memories of Real Music Concert featured a nice mix of well-loved Jazz Classics, some R&B, a little neo-soul, some classical music, a little Gospel, and also some original material. The featured headliner artist for the Memories of Real Music Concert was Singer, Songwriter, Music Director, and Actress, Lettrice Lawrence. Ms. Lawrence is an Award -winning, Professional Recording Artist who has been performing since the age of four. She is classically trained and, in operatic terms, is a coloratura Soprano, possessing a rare seven octave vocal range. She can effortlessly soar from a lower, rich contralto voice high into the whistle register, a technique used by the late singer Minnie Riperton, one of Ms. Lawrence’s favorite singers. Not all artists are able to reach that range.

Ms. Lawrence, with her business partners from the Smooth Soul Production Team, has produced two albums and eight singles. Her more recent accomplishments include the release of a beautiful song entitled “Give Me Peace” with Giovanni Joyce Imbessi for NET Day in honor of Cancer survivors and its patients who have passed on. The song was promoted internationally and is widely received. This past year Ms. Lawrence sang on an ambiance song entitled, “Long Day” by Jeff Russo for the FX show, Snow Fall, Season 1, Episode 4.  Her song, “Gonna Be Ready” was selected as song of the year on the Speak Your Mind Radio.

Ms. Lawrence has performed for several years with the South East Symphony. Each season she performs as a principle, under the musical direction of Maestro and Music Director, Anthony Parnther. In a recent performance with them, Ms. Lawrence captured the first of the evening’s many standing ovations as she delivered an amazing, soul- stirring rendition  of “Oh, Freedom” to a packed Royce Hall at UCLA and ended it on her signature whistle register note. 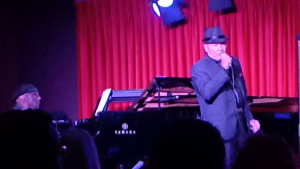 For the Memories of Real Music Concert on July 10, at Catalina Jazz Club, Carezma’s special featured guest, coming all the way from Canada, making his debut here in Southern California, was Jazz Crooner Colin Hunter.  By day, Hunter is known as Business Tycoon Colin Hunter, Founder, Chairman of the Board, and Owner of Sunwing Travel Group, one of the largest leisure travel companies in North America. But at night, onstage and performing in front of appreciative fans, Hunter becomes quite the party animal as his other persona, “Jazz Crooner Colin Hunter”, emerges.  Passionate and knowledgeable about music, specifically, influential 50’s Jazz and pop standards, as sung by such legendary crooners that include Tony Bennett, Frank Sinatra, Dean Martin, and Nat King Cole, Colin Hunter has developed his own smooth croon and stage swagger. He has emerged as one of Canada’s most popular crooners and entertainers.  Known for his smooth voice, rhythmic inflections, and charismatic personality, Hunter has made his presence known all over Canada, in Mexico, Dominican Republic, and Dubai.  He and his lovely wife, Joan, own a bistro in Toronto where Hunter is a regular featured performer. Several years ago, as Hunter launched Sunwing Airlines, he commemorated the occasion by simultaneously recording his first Big Band CD, entitled “COME FLY WITH ME” in a record breaking three hours! Now, Hunter’s voice is featured as part of the in-flight entertainment on Sunwing airlines as he smooth croons his passengers to and from their destinations. Over the years, he has recorded many more CD’s of the classics from the Great American Songbook, many of them with the Joe Sealy Quartet in Toronto.

Sealy, a gifted, accomplished musician and composer from Canada, was awarded THE ORDER OF CANADA in 2010 which is a Canadian National Order and 2nd highest honor for merit in the system of orders, decoration, and medals of Canada. Serving as Musical Director and pianist for Colin Hunter, the legendary Joe Sealy was also there to be a part of the Memories of Real Music Concert at Catalina Jazz Club in Hollywood, California. Additional talented band members for Hunter’s set were Mike Parlett, on sax, Ms. Rani Baralas on Bass, and Ishmael Ferguson on drums.

Carezma CEO Robin Parker, serving as Emcee for the evening, introduced Colin Hunter to the stage. With infectious energy, a big smile, and that similar coolness that other Jazz crooners have exuded, Hunter was clearly ready to get the party started! He began his set and set the tone for the evening with Come Fly with Me”.  Other, fan-popular tunes on his song list included “Heart”, “Smile, ”Ain’t that a Kick in the Head,” “St. Louis Blues,” and “Summer Wind.” Heads bobbed along with Hunter as his expressive voice crooned each familiar tune.  He was a lively, fun, and delightful performer! Based on the warm applause that the Catalina Jazz Club audience offered, Colin Hunter had succeeded in smooth crooning his way into some brand new Southern California hearts! 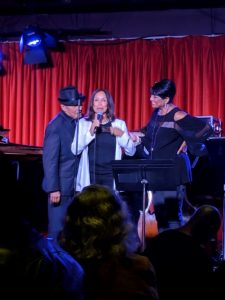 Not untypical of Carezma CEO Robin Parker, she had a little surprise in store for the Catalina Jazz Club audience. Hunter was joined onstage by two beautiful ladies from the audience. To the delight of the Catalina Jazz Club audience, and to Hunter himself, they were none other than music legends Ms. Eloise Laws and Ms. Freda Payne! The trio brought Hunter’s set to a lively close with their impromptu performance of “I’ve Got You Under My Skin “ which the crowd really enjoyed.

The impromptu performances didn’t stop there though. After a brief introduction by Carezma CEO Robin Parker, resplendent in her royal blue dress, the lovely Lettrice Lawrence took the stage. While preparations for her set were underway, Ms. Lawrence talked to the audience just a bit and then delivered an impromptu, a capella rendition of the Gospel song “I Love the Lord.”  It was spontaneous and beautiful, just a little teaser for the rest of the show to come.

For Ms. Lawrence’s set, some changes were made in the band personnel. Brandon Forte took over on piano with additional keyboards provided by Steven C. Martin, Redd Alder, Music Director for Ms. Lawrence, was on Bass guitar, with Ishmael Ferguson remaining on as drummer.  Background singers, Devin Shaw, Karlie Robinson, Brandon Ford, and Pam Johnson (sister of Ralph Johnson of Earth, Wind and Fire. Ms. Lawrence collaborates frequently with both siblings.) Johnson and Lawrence sang a searing duet entitled “Are you Listening?” for the Memories of Real Music Concert.

Ms. Lawrence’s song choices for the show showcased her versatility and wide vocal range, but also paid homage to other talented female vocalists. She gives a nod to her contemporary Jill Scott on”It’s Love.”  Lawrence shines on her cover of Oleta Adams’ “Get There.”  She and her background singers did a fabulous job on “Minnie Riperton’s “Inside My Love” with Lawrence easily hitting the whistle registry note. She and her crew brought back fond memories of other fallen legendary sisters of song Vesta Williams and Whitney Houston with a lovely, seamless arrangement by Music Director Redd Alder of “Congratulations” and ” I Have Nothing.”  Of course, The Legendary Queen of Soul couldn’t be forgotten. Ms. Lawrence and her crew rocked the house with “Chain of Fools”, one of Aretha Franklin’s most popular hits. Even our friend and visitor from Canada, Colin Hunter, was seen boppin’ to the beat. 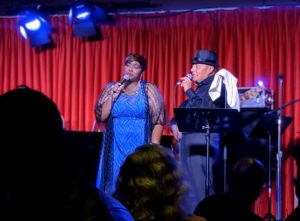 Ms. Lawrence brought Hunter back to the stage. They sang a touching duet of “Unforgettable.” Hunter now has official bragging rights to say that he got to sing with three beautiful women in the same night for the Memories of Real Music Concert!

Lawrence completed the Jazz portion of her set with “Someone to Watch Over Me” and “In a Sentimental Mood”.  She sang “I’ll Be Just Fine”, a touching and personal tribute to her recently deceased father.  The final song of the evening was a stirring rendition of “Ave Maria.” What an enjoyable Wednesday night at Catalina Jazz Club! 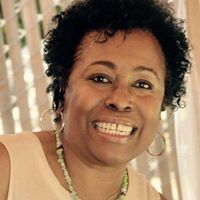 Carezma Entertainment is a boutique, innovative, Los Angeles based Entertainment Management agency that works hard to provide quality management to its elite roster of talented artists. At its helm is CEO Robin Parker who possesses a keen eye for talent and an uncanny knack for putting just the right artists in just the right place at just the right time. Parker is a lover and promoter of all arts and is a frequent collaborator with Catalina Jazz Club with a stellar reputation for presenting high quality productions featuring uniquely talented artists. Each production is exciting and no two Carezma productions are ever exactly alike!

Jazz Crooner Colin Hunter and Music Director Joe Sealy have gone back to Canada, but will return to Southern California in a few months. We look forward to their return!

Lettrice Lawrence continues to work in the studio for hire. Known to help other artists on various projects, Lettrice Lawrence is well loved and well known as she performs all over Los Angeles. She also travels abroad when hired to sing in shows all over the country.   She is a former elementary and high school teacher and is now a music director at Morningside UCC.

For information on either of these Artists, please contact Carezma Entertainment (310) 895-5729 or email carezma0123@gmail.com 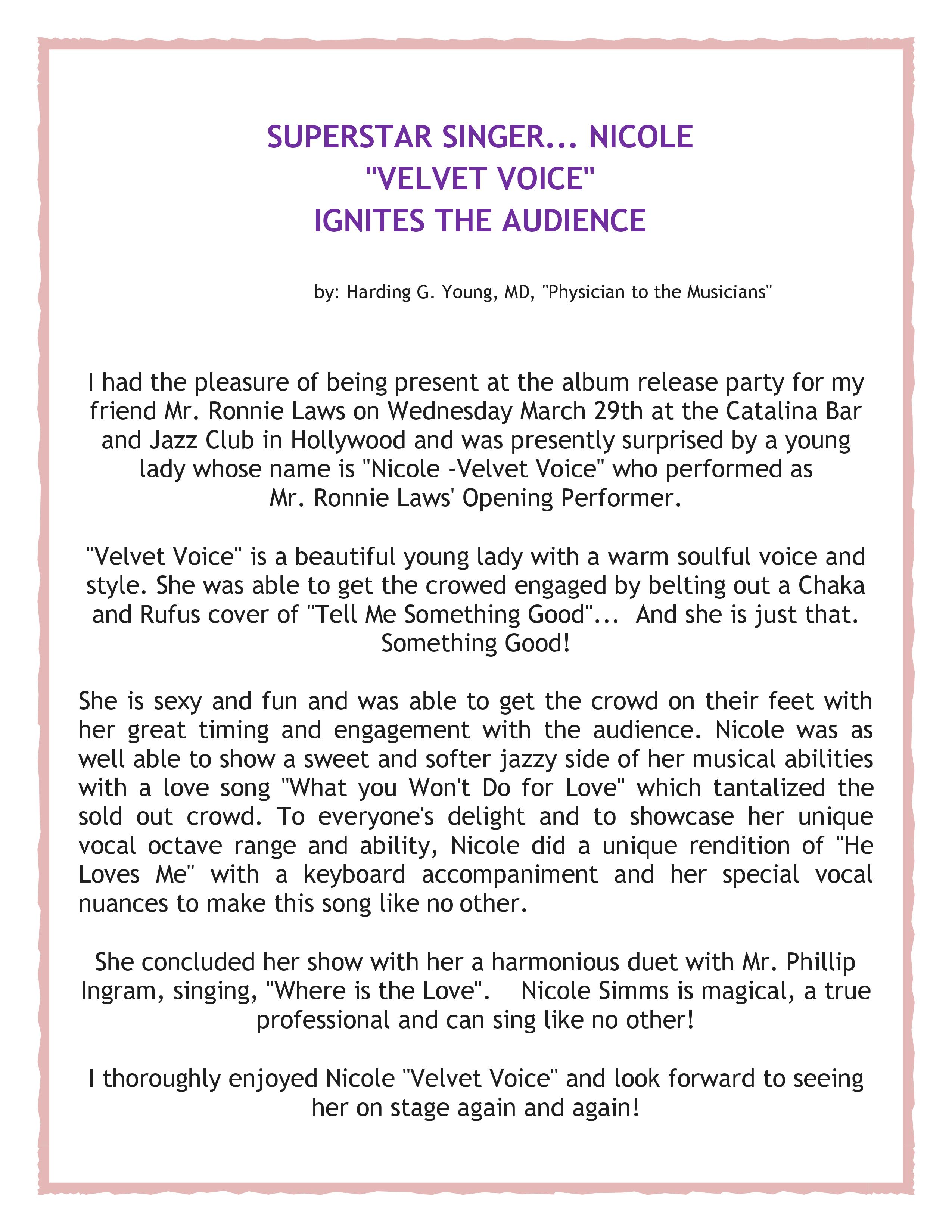